The discipline includes five firearm classes: Open Air Rifle, Open PCP, Open Springer, International PCP and International Springer, with shooters aiming to hit reactive ‘fall-when-hit’ targets of various sizes at often unknown ranges from 8 to 50m. As the name suggests, Air Rifle Field Target lends itself to being contested in a bush-type environment, although it may also be held on a more traditional range line. 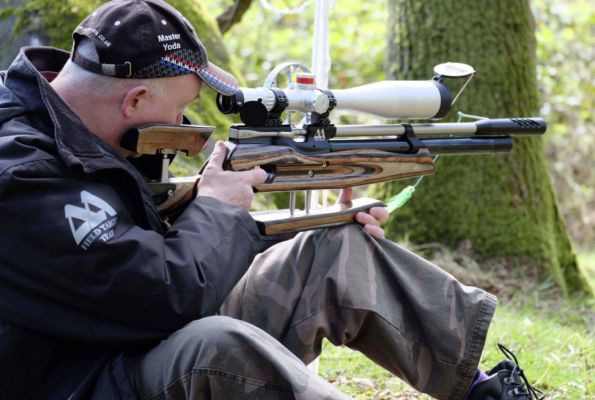 The challenge of the discipline comes from shooting a relatively low powered air rifle at targets at distances that are unknown to the competitor. The success of the competitor therefore depends on their marksmanship skills and ability to accurately estimate range.

The first official Air Rifle Field Target shooting event was held in 1980 in Magham Down in Sussex, England, with more than 100 people attending the inaugural event. It was originally started as an informal sport for anyone with an air rifle, but the targets used were not the knockdown type as used today. Rather, the original targets were simple silhouettes of common game species to which orange stickers were attached as ‘hit zones’.

The sport quickly gained popularity across the United Kingdom, and by the mid-1980s, the presently used fall-when-hit targets were introduced. Around this time, Air Rifle Field Target was taken up in the United States by several small shooting clubs, which led to the formation of the American Field Target Association in 1987. By then, the sport had reached significant numbers in the UK.

The first international Air Rifle Field Target events took place in the mid-1980s, when UK shooters were invited to attend competitions in the US. The first formal World Championships were held in the early 1990s, with the venue alternating between the UK and US and only these two major countries competing. In the 1990s, other countries began to appear on the scene, with Norway being one of the first and Germany following later. By the end of the 2012, the World Field Target Federation comprised more than 30 member countries, with SSAA National recognised as the regional governing body for Australia.

Air Rifle Field Target is a simulated field-type event that lends itself to a bush-type environment, though it may be contested on a more traditional range line. The range is set up with at least 10 ‘lanes’ up to a maximum of 25 lanes, with a minimum of two and a maximum of three targets per lane.

Targets must be the fall-when-hit type and may be made of wood and/or steel and be of any configuration. The ‘hit zone’ must be circular and of a contrasting colour to the faceplate. Targets must be resettable from the firing line. A match shall consist of no fewer than 30 targets.

Scoring is awarded on the basis of one point for each hit and a zero for a miss. A hit is awarded when a target falls. Any movement of the plate which does not result in the target or hit zone falling is scored as a miss. All targets are to be shot in numerical order, and any targets shot out of sequence are scored as a miss.

Air Rifle Field Target caters for both springer and pre-charged pneumatic (PCP) air rifles, and includes five firearm classes: Open Air Rifle; Open PCP Air Rifle; Open Springer; International PCP; and International Springer. Springer air rifles generate their power via a large spring/gas ram and piston. Alternatively, PCP air rifles generate their power by means of an onboard chamber of compressed air or gas. The chamber of compressed air/gas may be pressurised by any means, including refilling from a high-pressure air source such as a bulk supply tank (scuba tank or carbon dioxide bottle), high-pressure compressor, manual hand pump or an on-rifle/integrated pump. Rifles which employ a permanently attached remote feed system to separate bulk supply are not permitted.

Any shooting position is allowed, with the basic positions being offhand, sitting/kneeling or prone. Any stock of any configuration with no limit as to its design is permitted and it may be adjusted to accommodate various shooting styles and positions. Additional attachments are not permitted to be added or removed during competition. Butt-hooks are permitted, as are single rifle slings in either single- or two-point attachment so as to carry and help steady the rifle while aiming. Shooting mats and ground cloths are permitted for use at the firing line.