The Mandar handgun match was introduced into WA in the early 1980’s and quickly took off. The intent was to enable shooters from a variety of disciplines and clubs to compete on a relatively level basis.

It is now a mainstay discipline at many SSAA (WA) Clubs and growing in popularity.

Mandar is a static discipline which tests a competitor’s ability to perform highly accurate shots in a rapid-fire event. The match procedure in Mandar is consistent and therefore it allows new shooters an easy introduction to handgun shooting within a tightly controlled, safe and familiar environment.

It is extremely family friendly, all participants (men, women, children, the disabled and the elderly) can all compete together with the same rules and scoring procedures. A grading system is used, so if competing in competitions, you will be competing against people of similar ability.

Don’t be fooled into thinking Mandar is only for beginners, it is very mentally challenging and precise at the higher levels, requiring a cool head under pressure.

The Mandar match is divided up into 5 stages for a total of 48 rounds. They are fired at distances from 10 metres out to 25 metres using different rates of fire with turning targest set at different times.

After each stage all targets are scored and then patched ready for the next stage.

The course of fire in Mandar is always the same, giving competitors ample opportunities to really hone their skills. Tied Mandar matches do not utilise a count back to identify a winner. The target has an "X" ring and the winner is determied by the "X" count if there is a tied match. If the score and "X" count are the same then competitors are required to simultaneously repeat the last course of fire under a reducing time until one competitor posts a winning score, this is known as a “shoot off”. Mandar shoot offs are intense and challenging demonstrations of absolute precision under extreme stress, they are great to watch as well as compete in. 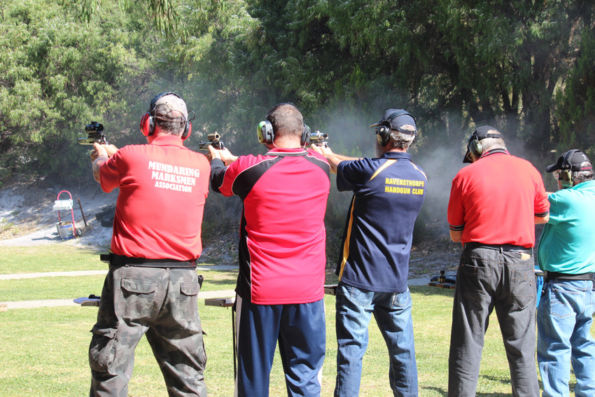 In Mandar, you can use a Revolver or Semi-Automatic Pistol with or without optical aids or you can go all out and use a fully customised handgun. Experienced Mandar shooters will typically tune their equipment to produce pinpoint accuracy.

The same pistol must be used to complete the match from start to finish.

Mandar competition is conducted using a the "T13-X" target in the ACS Catalogue. The 10 ring measures 100mm x 150mm with and "X" in the centre and the target is sized approximately 420mm x 650mm. All shots fired in competition will be scored onto the same target with patching used to obscure shots taken in preceding stages. Any shot which contacts a line will be awarded the higher score.

If you would like to try pistol shooting, or are more experienced and want to improve your accuracy and challenge yourself, then Mandar could be for you.