Steel Challenge became part of the Action Match discipline in 2009.

John Bianchi, a former US police officer and CEO of holster manufacturing company Bianchi International, developed Action Pistol shooting in 1979. In 1985, control of the discipline was transferred to the National Rifle Association (NRA) of America. Action Pistol was later introduced to Australia as Action Match by special agreement with the SSAA. Action Match is a demanding handgun competition, but beginners should not be daunted, as the discipline is graded to accommodate a range of abilities. However, like other disciplines, to be top of the game, particularly internationally, a commitment to regular and dedicated practice is required.

Open rules and restrictions on the type of handgun (pistol or revolver) and accessories used are very liberal, provided the handgun is safe. Pistols can be fitted with metal ‘wings’ to help support them when shooting around a barricade. Peep, ghost, optical or electronic sights may be used, as can ported and compensated barrels.

Open Modified does not allow for metal ‘wings’ and is a category suitable for IPSC open handguns.

Production consists of readily available, commercially produced pistols fitted with metallic sights. Again, the handgun can be a self-loader or revolver. All standard safety features of the handgun must operate properly and custom shop pistols are not allowed. There are some minor modifications that have been approved, which have little effect on the overall competitiveness of the handgun.

The cost of a handgun is a major consideration when getting into Action Match. Most clubs have handguns for a beginner shooter to try. With a Production category handgun, anyone can get involved at minimal cost and be quite competitive with an over the counter pistol or revolver. Many manufacturers produce handguns suited to the Production category.

Metallic permits the use of metallic sights. There are maximum barrel and sight radius dimensions in this category, as well as a minimum calibre restriction of 9mm.

Although NRA rules provide for more than a dozen events, only four events are shot in Australia, with each event consisting of a total of 48 shots. These follow the courses of fire used in the Bianchi Cup tournament. The match requires 192 rounds and is scored out of 1920 points. On the paper-target events, a small ‘X’ inside the ‘A’ scoring zone is used for tie-breaking. A hit in the ‘X’ zone is scored as 10.1. The match is shot in ‘strings’ of six shots at various distances and different time limits. Some events must be shot standing and others may be shot from the prone position. Generally, as the distance increases, the time allowed also increases. The four courses of fire are Practical, Barricade, Moving Target and Falling Plate.

Targets are engaged from standing behind a barricade. All competitors may use the barricade for support. However, no part of the handgun can rest against the barricade, except for Open category pistols. Six shots are fired from 10, 15, 25 and 35 yards twice. Times vary with distance from five to eight seconds, depending on the distance.

Six shots are fired from 10, 15, 20 and 25 yards, with times varying from six to nine seconds depending on distance. The competitor must shoot the 10-yard stage from the standing position. The 15-, 20- and 25-yard stages may be shot in the prone position at their option. The targets are 8" steel plates, which must fall for a score to be registered.

The categories described on the right each allows for different equipment and accessories. Competitors normally specialise in one category rather than attempt all three. As the stages consist of six shots or a multiple thereof, revolvers are very competitive in Action Match. In Australia, the most popular cartridges are .38 Super, .357 SIG, 9x19mm (9mm Luger) and .38-45 for self-loading pistols and .38 Special and .357 Magnum for revolvers. Ammunition has to make ‘power factor’ of 120,000 to be allowed for competition. Power factor is calculated by multiplying the bullet weight (in grains) by muzzle velocity (in feet per second) as measured by a chronograph. Pistols are drawn from a holster and shooters must be accredited to use a holster to shoot competitively. 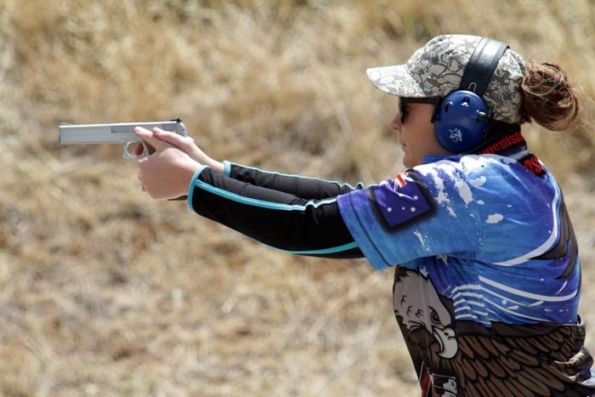 The use of holsters is permitted and they shall be mounted in the general vicinity of the waist and must retain the handgun. Triggers may not be fully exposed, with the exception of western holsters for single-action revolvers. Rimfire competition does not involve the use of a holster.

Steel Challenge comprises eight stages, in which competitors are required to shoot from a stationary position at static steel plates. The eight stages shot are Accelerator, Five to Go, Outer Limits, Pendulum, Roundabout, Showdown, Smoke & Hope and Speed Option. Each stage is unique in its design and offers a different challenge to the shooter. All courses of fire are shot from a single shooting box, except for Showdown and Outer Limits, which have two and three shooting boxes respectively.

Steel Challenge scoring is simple: Your time is your score. There are five plate targets, with four being primary plates and the fifth being the ‘stop plate’. Each of the primary plates must be hit at least once during each string of fire, followed by the stop plate, which must be hit last to stop the time. Competitors may fire as many rounds as they deem necessary for each string of fire. The best four out of five strings will be counted as the total score for each stage, except for Outer Limits, which will be the best three out of four runs. The total score for all stages will determine the order of finish for final standings.