Shotgun permits the use of any smoothbore shotgun up to 12-gauge to shoot clay targets. The discipline includes four main competitions. Sporting Clays is usually held in a bush setting, with competitors shooting from six or seven stands and traps throwing targets to simulate hunting. 5-Stand has five stands separated by a couple of metres each, with traps throwing single or double targets in different directions. Low-Field and High-Field competitions are shot from pads level with or close to the trap house and the traps being above or below ground level. 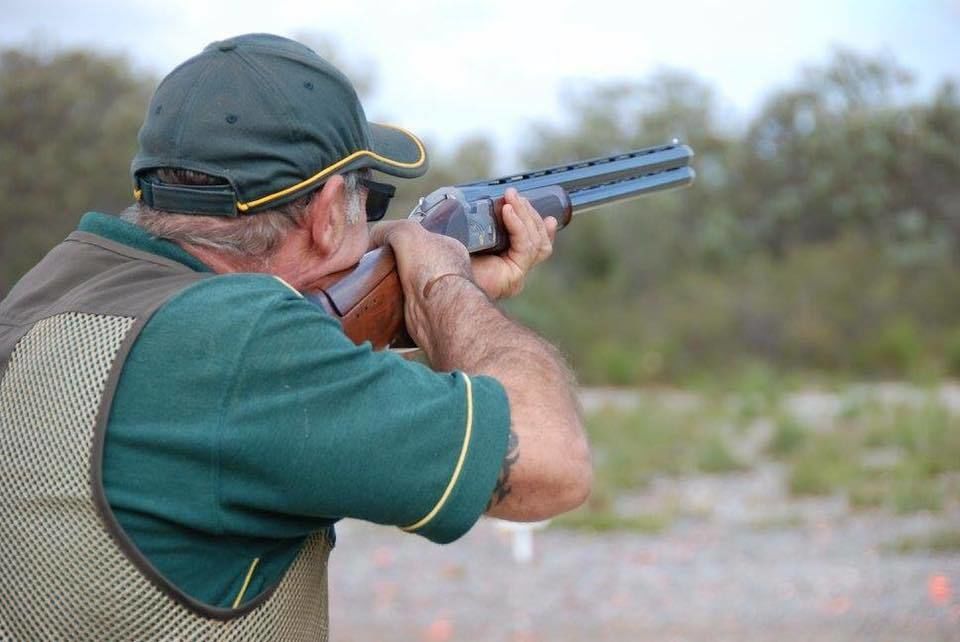 As the name suggests, the Shotgun discipline involves shooting a shotgun to break clay targets. This sport, as we know it today, has its origins back in the United States in 1880, when George Ligowsky of Cincinnati perfected a clay target and a machine from which it could be thrown. In the same year, an Englishman named McCaskey invented a target made of a blend of pitch and river silt that combined the qualities of durability and brittleness.

Prior to the developments of clay targets, target shooters used to shoot at live pigeons, which were released in various ways, including from spring-loaded boxes and from underneath gentlemen’s top hats. Enormous amounts of money were often bet on the result of a single bird, and there were professional live bird shooters who made their living from travelling to various shoots both locally and internationally. This activity was very popular until it was banned in England, the United States and later in various European countries. It is also banned in Australia. 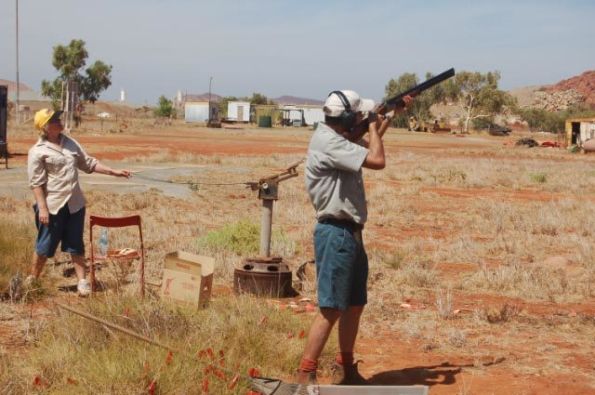 To fill the gap left by the absence of live bird shooting, some very ingenious targets were made around 1866 from glass in the shape of a ball, which were filled with feathers or black powder and gave off a flash when well hit. There was plenty of experimentation with wood, leather and other materials, but nothing was successful or particularly realistic until the earliest clay targets were invented.

Once clay targets were in common use, it was possible to conduct shoots that were fair to all, as consistently breakable targets could be thrown the same for each competitor. SSAA shooters are some of the beneficiaries of this research and today, we can get together with friends and have a great time breaking modern clays in various styles of competition or just socially for fun.

There are many clay target shotgun competitions, which vary in the type of targets thrown, the angle, height and speed at which they are thrown, and the field layouts from which shooters shoot.

The area of clay target shotgun shooting that has shown the greatest growth worldwide in recent years is Sporting Clays. This competition is usually set up in a natural bushland setting, with the traps presenting clay targets that simulate hunting a variety of game such as ducks, rabbits, quail and pheasants. The traps can be concealed in the bush or on towers, with the targets only visible in cleared areas.

The targets can be shot over a course of six or seven ‘stands’, where shooters are shown targets in singles or doubles of various sizes and colors, and shoot each station with their squad of five or six shooters in turn. Most courses comprise 25 targets and the degree of difficulty can vary from easy to extremely hard.

The SSAA has an interesting variation of Sporting Clays called 5-Stand. This is a clever and space-saving way of achieving much the same as a traditional Sporting Clays course, but in a much more economical space. 5-Stand has five shooting stands or stations that are lined up in a straight line close to each other. The stands are surrounded by six to eight numbered traps, which throw targets in every possible direction, including from behind, towers, vertical shots and rabbits, with all targets generally converging in an area in front of the stands. Competitors rotate through the five stands and receive an identical mix of targets in a random order, with single and double targets presented. This provides a real test of a shooter’s ability to read targets quickly and shoot them before they get beyond the effective range of a shotgun.

5-Stand is conducted with a computer and the course can be as easy or as devious as the course-setter decides. One round comprises 25 targets, and because the competition is compact and relatively quick to shoot, it can be very tempting to shoot five or six rounds in a day. There are several other versions of 5-Stand, including COMPAK and Birdbrain, where the rules vary slightly. 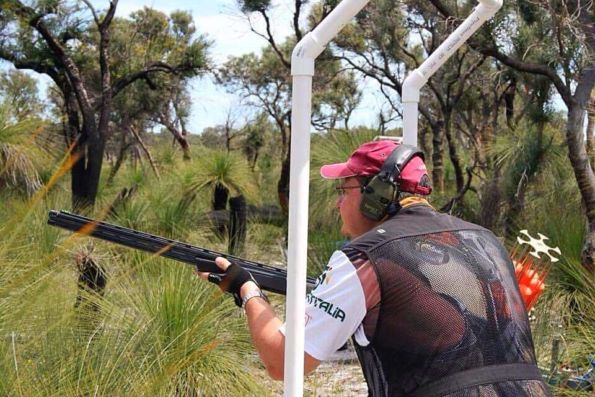 Squads of up to six competitors shoot alternately from their designated positions. Competitors will rotate over the 10 positions, five at a time, until the competition is completed.

High Field Shotgun has similar shooting positions and routines as Low Field; however, the trap is located in a tower 10m above the ground, enabling competitors on both sides of the tower to look up and backwards to sight the target as it leaves the trap.

Many SSAA members enjoy participating in other variations of clay target shooting, including Trap and Skeet. In Trap or Down the Line (DTL), a trap is concealed in a house and throws rising and going away targets at unknown angles in front of shooters, who shoot from handicap positions on five lanes radiating from behind the trap house.

Skeet shooting is shot over nine shooting pads positioned in a semicircle between a high tower trap 3m above ground on one side and a low trap at ground level on the other side. The flight and speed of the targets is fixed, but as shooters move around the shooting pads, they are presented with a variety of single and double targets at different angles.

In the Sporting Clays and 5-Stand events, targets are thrown at various speeds, in singles, doubles or in pairs, from in front of, behind, low, high or above, straight away, crossing, quartering, incoming from either side, in the open or partly hidden by trees, bushes or other obstacles. The targets themselves may include standard and rabbit targets, as well as those of smaller diameter, such as midi, mini, super mini, battue, rocket and flash targets. SSAA rules require that all targets must be set to be shootable within 40m of the competitor’s position and be visible for sufficient time for a competitor to fire up to two aimed shots at each one. 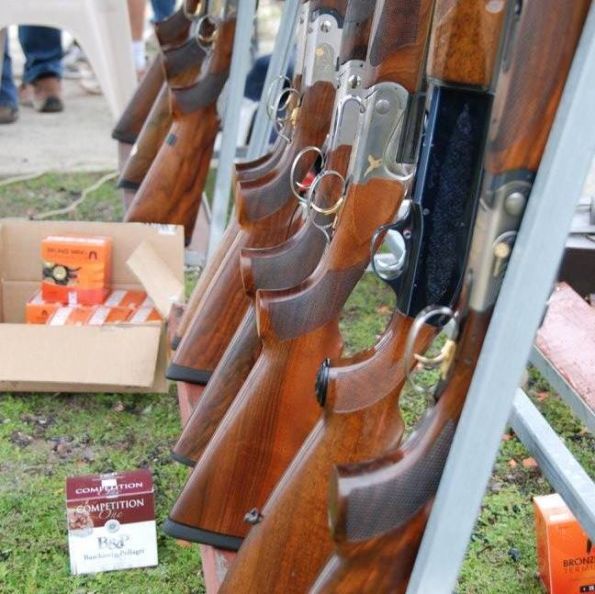 SSAA rules permit the use of any smoothbore shotguns, providing the gauge does not exceed 12-gauge and the barrel/overall length complies with the state or territory laws. The most commonly used shotgun is the 12-gauge as there is a wide selection of cartridges available that are generally cheaper to purchase.

In the early days of competition, many shooters made do with their Trap or Skeet shotguns, but they soon realised they needed a shotgun that was a compromise of the two.

A shotgun that shot high was a problem where targets were falling or target presentations required quick shooting that didn’t allow the shooter time to compensate for the varying trajectories and shot placement of a shotgun that shoots high. Trap shotguns were often modified by lowering the stocks and boring out the barrels to allow more spread of shot for closer targets. Today, the Sporting Clays shotgun is every bit as specialised as any Trap or Skeet shotgun. It is designed to make the shooter’s job easier on the infinite variation of targets thrown. Shotguns suitable for Sporting Clays and 5-Stand generally have sporting-style stocks and variable chokes.

With the advent of screw-in chokes and shotguns specifically stocked for Sporting Clays competition, which centre patterns at 30m, shooters now have appropriate shotguns to cope with the infinite variety of rising, falling, incoming and outgoing targets. Simulated field targets can be thrown in any direction, which places particular demands on the shooter and means that a shotgun that shoots very flat is a great advantage.

While there are many very expensive shotguns around, a top-of-the-range gun is not essential. As with all shotgun shooting, gun fit is very important. New shooters will find the more experienced shooters and shooting coaches willing to give advice on gun fit, style and technique to help them choose a suitable shotgun. Good secondhand guns are available at most gun shops and this is an excellent starting point for anyone interested in trying clay target shooting.

A maximum of two cartridges is allowed in the shotgun at any one time. Shotgun cartridges may be up to 32g (1 1/8oz) and shoot no larger than No. 6 size shot. Many competitors use 28g (1oz) cartridges very effectively. Reloaded cartridges are permitted and often encouraged. Black powder cartridges are not permitted in competitions.

A shotgun vest is a very important piece of equipment, as they have several large pockets for cartridges and shoulder padding to dampen recoil. Hearing and eye protection is strongly recommended, as is enclosed footwear. Some competitors wear glasses with a variety of colored lenses to improve the visibility of clay targets in certain conditions. 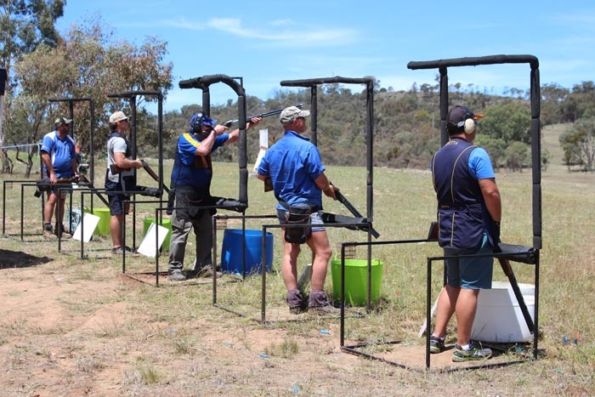