Single action shooting is based on the use of original and reproduction firearms of the period of the American "old west". Participants also do their best to dress in clothes depicting this famous period of history. It is run under the international rules of the "Single Action Shooting Society" or SASS, which now boast in excess of some sixty thousand members worldwide.

Here in Australia SASS is promoted and proudly supported by SSAA. SASS has a motto and that motto is the "Spirit of the Game", in Aussie terms this simply means good sportsmanship. We are a family sport and regardless of age or gender we do our best to make our game enjoyable for all those participating. We have many family groups competing with juniors from 12 through to some folks well into their 70's and they all have one thing in common - they all have an interest in the pioneering days of the 'Old West'. This common interest manifests itself not only in the mastering of skills associated with the use of antique firearms or reproductions of these firearms, but in keen competition underpinned with a sportsmanship sometimes lost in today's sporting activities.

With many Clubs throughout Australia having a good following in single action shooting, the National Championships are held annually at the SSAA QLD Millmerran complex. This event has continued to grow and now has many international competitors attending on a regular basis.

Targets used in SAS matches are generally reactive plates specifically designed for this type of competition. They can be square, round or card-suite shapes and are often based on a 400mm x 400mm size. Multiple targets are used on each match stage. Additionally, clay targets may be used in some matches. Targets are set in accordance with stage description and must be engaged in exactly the same sequence from static positions, regardless of which category a participant competes in. Sequences are clearly described in the shooter's program.

The firearms used today are single action revolvers, lever action rifles and side-by-side shotguns without automatic ejectors. Essentially, the firearms and calibres used in competition are those commonly in use in the 19th century up until 1896.

Matches may be as few as four stages; however, most major matches above club level are ten to 12 stages or 'courses of fire', each being an individual match in itself. 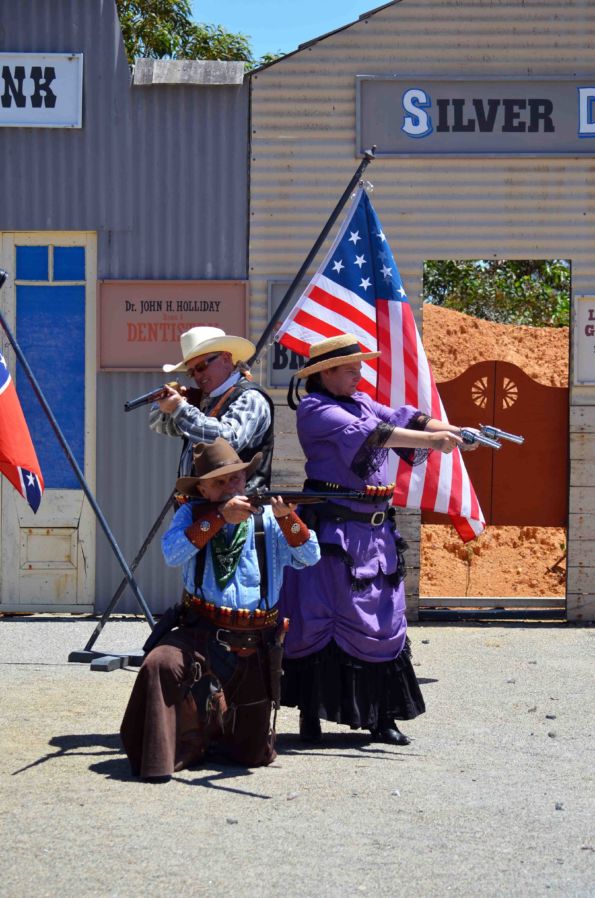 Single Action shooters, from all walks of life, male and female, young and old, are attracted to the discipline and they all have one thing in common - they have an interest in the pioneering days of the Old West. This common interest manifests itself not only in the mastering of skills associated with the use of antique firearms or replicas of these firearms, but also in keen competition underpinned by a sportsmanship that is sometimes lost in many of today’s other sporting activities.

Generally, Single Action participants aim to preserve the ‘spirit of the game’ by fully participating in what the competition asks. The shooters do not look for ways to create an advantage out of what is or is not stated as a rule or shooting procedure. They endeavour to dress the part, use the appropriate competition tools and respect the traditions of the Old West.

Some 100 to 150 years later, the spirit of the game is more commonly referred to as ‘good sportsmanship’.

Single Action shooters are required to select a shooting alias for themselves, which is representative of a character or profession from the Old West or the Western film genre. A unique aspect of Single Action is the authentic period or Western-style dress. Shooters strive to dress the part with clothing, shoes and hats that are representative of the time period. This adds to the uniqueness of the sport and helps create a festive and informal atmosphere. It also adds to the difficulty factor of competition.

The firearms used in competition today are typical of those used in the Old West and include single-action revolvers, lever-action and pump-action rifles, side-by-side shotguns without automatic ejectors and lever-action and pump-action shotguns. Essentially, the firearms and calibres used in competition are those that were commonly in use during the 1800s.

The firearms may be originals or replicas, but they must all be in good and safe working order. Some modifications are permitted; however, modifying the firing, cocking, chambering or levering mechanisms of the firearm in any way that changes the process from an entirely manual operation to any other style operation is not permitted. Some shooters add external embellishments such as tacks, carving, engraving, chequering and inlays to the stocks and grips of their firearms to reflect the time period. This is permitted, as long as it does not provide any kind of radical or target-type grip enhancement and is permitted within the specific match rules relating to external modifications. All firearms may be repaired and/or restored to their original condition and internal parts may be smoothed, reprofiled, polished, deburred or replaced, provided they do not conflict with the rules relating to internal modifications. 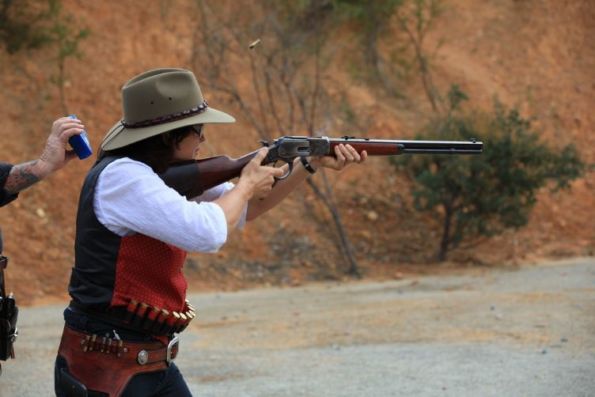 The rifles or carbines used in main and team matches must be originals or replicas of lever-action or slide-action rifles manufactured during the period from about 1860 to 1899 incorporating a tubular magazine and exposed hammer. Rifles with box magazines are not permitted. Certain shooting categories require a specific type of rifle and ammunition to be used.

Rifles must be chambered for centrefire pistol calibres of at least .32-calibre and no larger than .45-calibre. Rifle calibres such as the .30-30- and .38.55-calibres are specifically prohibited. The use of .22-calibre rimfire rifles is allowed within certain Junior shooting categories. Possibly the most popular calibres for use in main competition are the .45 Long Colt and .38-calibres. 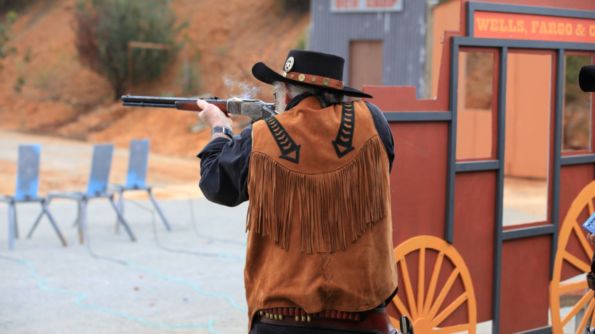 Original or replica side-by-side or single-shot shotguns typical of the period from about 1860 to 1899 with or without external hammers, single- or double-triggered and without automatic ejectors are permitted. Lever-action and tubular-feed exposed hammer shotguns are also permitted.

The Model 1897 Winchester slide-action shotgun is the only slide- or pump-action shotgun allowed for competition. Military configurations are specifically prohibited.

Certain Junior categories allow for the use of .410-bore shotguns of single- or double-barrel configuration, with certain shooting categories also requiring the use of specific types of shotgun

Rifles must be chambered for centrefire pistol calibres of at least .32-calibre and no larger than .45-calibre. Rifle calibres such as the .30-30- and .38.55-calibres are specifically prohibited. The use of .22-calibre rimfire rifles is allowed within certain Junior shooting categories. Possibly the most popular calibres for use in main competition are the .45 Long Colt and .38-calibres. 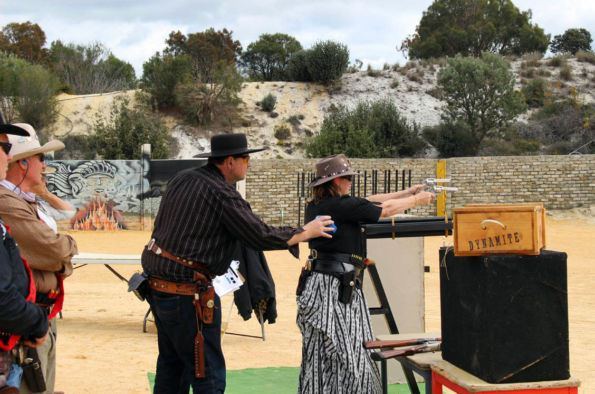 Original single-action revolvers manufactured prior to 1899 or approved replicas are the only revolvers allowed in main match competition. Certain shooting categories require the use of specific types of revolvers and calibres. No more than two main match revolvers may be carried to the firing line at any time. The Revolver calibres are consistent with those used in Rifle competition.

There are a number of shooting categories within Single Action competition with each competitor only competing against other competitors within their chosen category. Broadly speaking, the main categories are Age Based, Duellist, Gunfighter, Black Powder, ‘B’ Western and Classic Cowboy/Cowgirl categories, which all have specific clothing requirements, as well as specific firearm requirements. Each of the categories has its own difficulty factor, which demands high skill levels. Many participants do not restrict themselves to only one shooting category and may nominate in any category for which they qualify at various matches.

Club-level Single Action matches may be as few as four stages or courses of fire, but major matches above club level comprise 10 to 12 stages, with each being an individual match itself. There are also many varied side and team events, including the Cowboy Fast Draw (which uses a form of ‘simunition’ or training ammunition), Wild Bunch and Pat Garrett matches, with each having its own specific set of rules, as well as speed events and long-range rifle events. 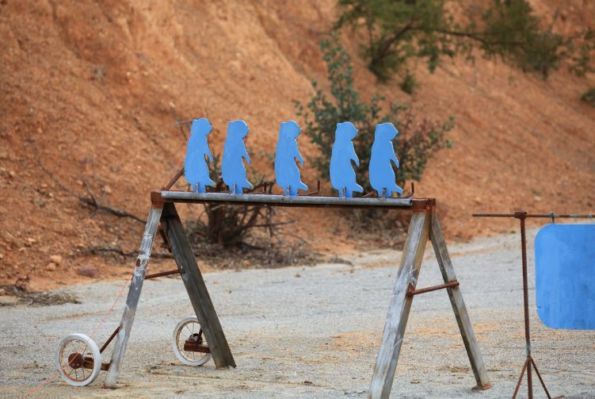 Targets used in Single Action matches are generally ‘reactive’ plates specifically designed for this type of competition. They are varied, with most common shapes being square, round or card-suit shapes often based on a 400x400mm size. Novelty targets, buffalo, ore cart and tombstone-shaped targets are also commonly used.

Multiple targets are used on each match stage. Clay targets may also be used in some matches. The targets are set in accordance with the stage description and must be engaged in exactly the same sequence from static positions, regardless of which category a participant competes in. Sequences are clearly described in the shooters’ program.

Matches are scored based upon elapsed shooting time and added penalty points for missed targets. Each stage is scored individually and the total combined scores for all stages are ranked for place of finish, either overall or by category. Rank scoring is recommended when all stages of a match are not of around the same duration and degree of difficulty. The alternative to rank scoring is scoring based upon total elapsed time; ie, the total raw time plus penalties. More recently, the stage point scoring system has been introduced.