Target Pistol is an international discipline in which handguns of various calibres and categories are shot in a variety of matches to hit paper targets placed at 25 and 50m with varying time restrictions. There are six main events in Target Pistol, with each based around the class of the handgun. Three main matches are shot at the national Target Pistol level.

Target Pistol was introduced into the SSAA’s stable of shooting disciplines in 2005 and is derived from the National Rifle Association (NRA) of America’s ‘Bulls Eye’ Pistol match. So enthusiastic was the uptake of the discipline in Australia that two years later, the SSAA sent a team to the USA for the NRA Nationals.

Competition consists of one primary match and a number of secondary matches shot with five classes of handgun. A second primary match, International Mayleigh for instance, is shot with one class of handgun, such as a .22-calibre pistol, either singleshot or self-loader, or a revolver with any sights using only rimfire ammunition. The basic course of fire is the 30-shot National Match consisting of 10 shots at 50m in 10 minutes. This is followed by five shots at 25m in 20 seconds in two strings of five shots and then five shots at 25m in 10 seconds, again shot twice. Both centrefire and .22 handguns can be used in this match. The 900 Match contains the National Match as described above with additional strings to make up a match of 90 shots. The additional strings consist of two strings of 20 shots at 50m in slow-fire time, 20 timed-fire shots at 25m and another 20 shots at 25m in rapid fire. This match is the basis for the Camp Perry Championship, the annual tournament in the USA.

In addition to international competitions, state and national titles are conducted annually. Postal competitions are becoming a popular way of competing without the expense of travelling vast distances. For competition details or further information about Target Pistol, visit the SSAA Competition Information page or contact your SSAA state or territory office.

Target Pistol rules do not provide for specific clothing restrictions or allowances. Gloves may be worn, provided they don’t form an artificial support. Clothing should be suitable for the conditions, but not restrict movement, and hearing and eye protection is highly recommended. 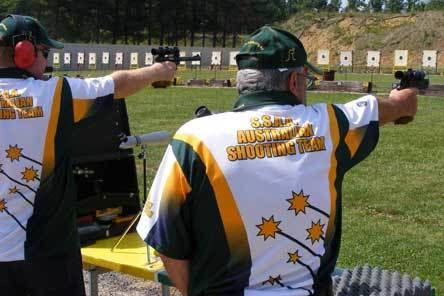 Target Pistol can be regarded as a combination of events similar to ISSF Standard Pistol and Service Pistol. Target Pistol comprises six events, each of which is based around a particular handgun type, and there are three types of matches to suit one or more handguns. The sport offers shooters a variety of events using centrefire and rimfire pistols, ranging from 30- to 180-shot events. Being of American origin, distances are in yards as per the NRA Rule Book. However, at Australian handgun shooting clubs, metres can be substituted. There are five handguns required for the full Target Pistol program. It is not necessary to purchase five handguns though, as the one can be used for more than one match in some cases. Also, many handgun shooters will already have the necessary firearms in their safe without the need for further purchases. As with most target shooting disciplines, the choice of firearm depends a great deal on what you can afford, but generally speaking, the more expensive a pistol is, the better it will group.

Any .22 Calibre Pistol or Revolver

In the Any .22 Calibre Pistol or Revolver event, a .22-calibre pistol, either single-shot or self-loading, or a revolver with any sights using only rimfire ammunition is allowed. It is worthwhile consulting the rule book for the finer points as to what is and isn’t allowed.

Any Centrefire Pistol or Revolver

In the Any Centrefire Pistol or Revolver event, a centrefire pistol, either single-shot or self-loading, or a revolver with any sights of .32-calibre or larger is allowed. However, under current Australian firearms regulations, this only allows up to a maximum calibre of .38 (.357").

The International Mayleigh event only allows the use of the same handguns as used in the Any .22 Calibre Pistol or Revolver event, but is conducted at 50m.

The Distinguished Revolver event is specifically for standard factory revolvers capable of firing a .38 Special cartridge using a 158-grain round-nose or semi-wadcutter projectile. The barrel is not to exceed 6.5" and only open sights are allowed. The revolver must be able to operate in single- and double-action modes.

The US M9 Service Pistol event was designed around the commonly available Beretta 92-style pistol. Most handgun manufacturers produce a similar pistol that fits this category.

The Standard .22 Pistol event allows any .22-calibre rimfire pistol, self-loading pistol or revolver. The pistol may have orthopaedic or specially shaped grips. It may also have an adjustable rear-sight and a trigger pull of at least 2lb. 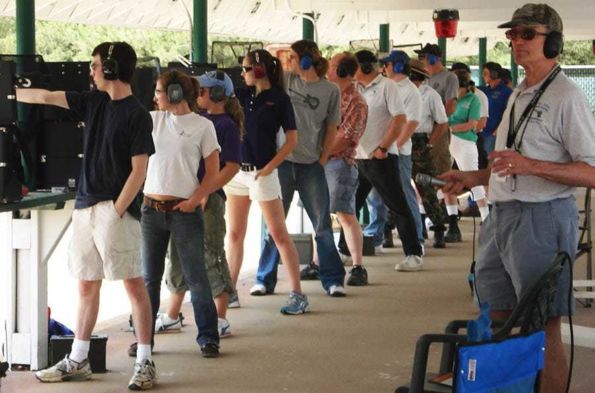