Lever Action match is unique to the SSAA. It is an exciting and popular event Australia wide.

There are two distinct matches involved:

• Lever Action: which may utilise any calibre rifle provided it is a lever action and has an outside hammer. .22 rimfire may be used in this match.

• Classic Calibre: where any cartridge designed prior to 1938 is acceptable, except .22 rimfire. Classic Calibre is a 35 round match and Lever Action is 50 rounds.

They soon became aware that there was an abundance of lever-action rifles with which black powder could be used. In 1976, the first National Lever Action Championships were staged in Brisbane (nitro powder by this time) with interest sparking in other states.

As the name implies, lever-action rifles are used exclusively for this event. Apart from the historical and traditional intentions, lever-action rifles provide rapid recycling for the timed events. The matches are designed to provide a variety of target types, shooting positions and distances, as well as varying time limits. This discipline is hunting oriented with familiar aspects taken from other SSAA disciplines such as Field Rifle and Metallic Silhouette.

There are two basic categories in the Lever Action discipline: Classic Calibre and Open (centrefire and rimfire).

The Classic Calibre Lever Action Rifle is essentially a centrefire rifle as issued by the factory having a two-piece wooden stock, a tube-feed magazine, open hammer and traditional open-type iron sights and chambered for any centrefire cartridge factory produced prior to the end of 1938. Examples of some of the calibres used are .30-30, .38-55, .32-40, .25-20, .218 Bee, .357 Magnum, .32-20 and .44-40. Wildcatt cartridges are not permitted in the Classic Calibre category of competition. Shooting with the traditional open sights is difficult, but a great way to improve one’s shooting skills and to understand the various techniques required to shoot accurately. Targets used in the Classic Calibre competition are all contour targets (animal profiles) with score zones marked on vital areas from 10 to five. Some of the contour targets used are the small bear, buffalo head, pig, rabbit, feral cat, goat, crow, fox head and running fox. The competition is shot over distances of 100m, 50m and 25m using the positional stances of any field position: standing unsupported, sitting unsupported, standing post rest and sitting post rest. Timing for the course of fire can vary from five minutes to 15 seconds for five shots. A typical match would consist of 35 rounds with targets at 100m, 50m and 25m. Two targets that are always part of the competition are the small bear (100m any field position) and the fox head (50m standing unsupported), with five shots in five minutes for each target. The aggregate score for these two targets is the basis for the Classic Calibre Proficiency Medals and grading.

The Open Lever Action Rifle category is divided into two separate events at National level, with these being centrefire and rimfire, where competitors need two lever-action rifles. At state and club level, it is permissible to use either, as only one event is shot and is referred to as the Open event.

The description for the National Open event is any lever-action rifle with a wooden stock. Any calibre or handload or wildcat will be accepted. Pointed projectiles will not be permitted in rapid-fire events. Peep, vernier and target sights, with the exception of those using optical inserts and/or rubber eyepieces, will be permitted.

The targets used in the Open category are usually a combination of the 50m ISSF Precision Slow Fire Pistol target and a number of animal profile targets. The competition is generally a 50-shot match. A typical course of fire for an Open event would be the 50m ISSF target (100m any field position), and the 50m ISSF target, scoring seven to 10 only (50m standing unsupported) with five shots in five minutes for each target. The aggregate score for these two targets is the basis for the Classic Calibre Proficiency Medals and grading. The 50m ISSF target is also used for the rapid-fire events with the target for centrefire placed at 50m (five shots in 15 seconds) and the target for rimfire placed at 25m (five shots 10 seconds, scoring seven to 10 only). These three targets are shot twice and the other 20 rounds are made up by other contour targets with five shots at each in any time limit up to a maximum of five minutes per target.

The rimfire category currently permits .22LR, .22 Magnum and .17HMR. The .22LR still reigns supreme on the national scene, probably due to the extensive research and development over the years on target-quality ammunition. For centrefire, basically any calibre can be used for which there is a lever-action rifle available.

The Classic Calibre lever-action rifle can also be used in the Open centrefire event.

Lever Action rules exclude clothing specifically designed for competitive rifle shooting such as shooting coats, trousers, gloves and boots that may provide artificial support to the shooter. The intention of this rule is that all competitors wear normal hunting or field wear. Similarly, other shooting accessories such as rifle attachments, butt hooks, palm rests, spotting scopes, padded kneeling cushions or seats are also prohibited.

Apart from SSAA branch competitions, state and national titles are conducted annually. Each state has a Lever Action discipline chairman or contact and many branches shoot the match on a regular basis. 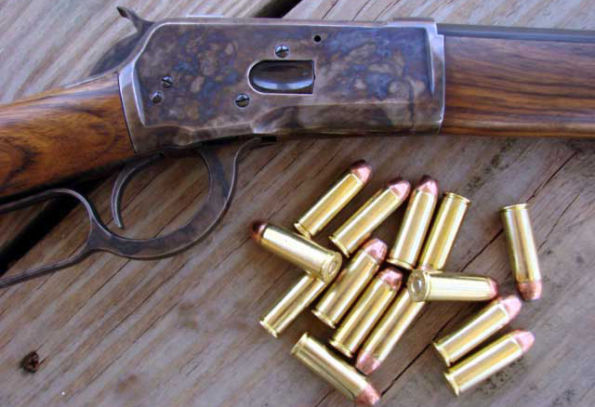