All of the ballistics associations and firearms dealers attended a major presentation at WAPOL Monday 5th November regarding the disturbing increase in burglaries with a related upsurge in firearms thefts.

According to WAPOL there has been an increase of stolen firearms over a period of time with 42% metro and 58% country, disappointingly the recovery rate is extremely low.

On investigation Police are reporting that a percentage of licensed owners are failing to take the basic steps to secure, making it easy for the crims to steal, in some cases it was keys being easily found , safes not bolted down or non compliant safes.

This has led to WAPOL launching a major initiative called Operation Bluesun starting Monday 5th November by visiting what they have identified as high risk licence holders.

The folks’ getting visits from what we are told is on “intelligence” but also some other factors such as;
Victim of crime previously.
Previous issues with failing to secure.
Area of concern .. meth up rise in a suburb for example .. lots of burglary’s.

So basically what will happen is folks may get an inspect by general duty police in the normal course of their day to day duties, they will seek a mutually agreed time to inspect and check that your safe storage is up to date. They have also been advised to show discretion and provide advice if requested.

As frustrating as this is, ultimately law abiding firearms owners don’t have anything to hide, it’s a healthy reminder to lock up properly and in reality if a safe isn’t bolted down its hard to defend

I did raise other issues at the presentation such as an education campaign , stronger penalties for gun theft, and trying to push the minister along with the agreed reforms that will allow shared storage .. ie Fred goes on holidays interstate but can leave his guns with Steve instead of leaving them in an uninhabited house. We are waiting on a response from the minister....

Let as many shooters know as soon as possible to double check before they get a visit and any issues let us know.

As an aside the photo below is a copy of one side of a Safe Storage flyer we have been trying to get put into firearms licencing renewals for over 3 years now with no success.....frustrating times! 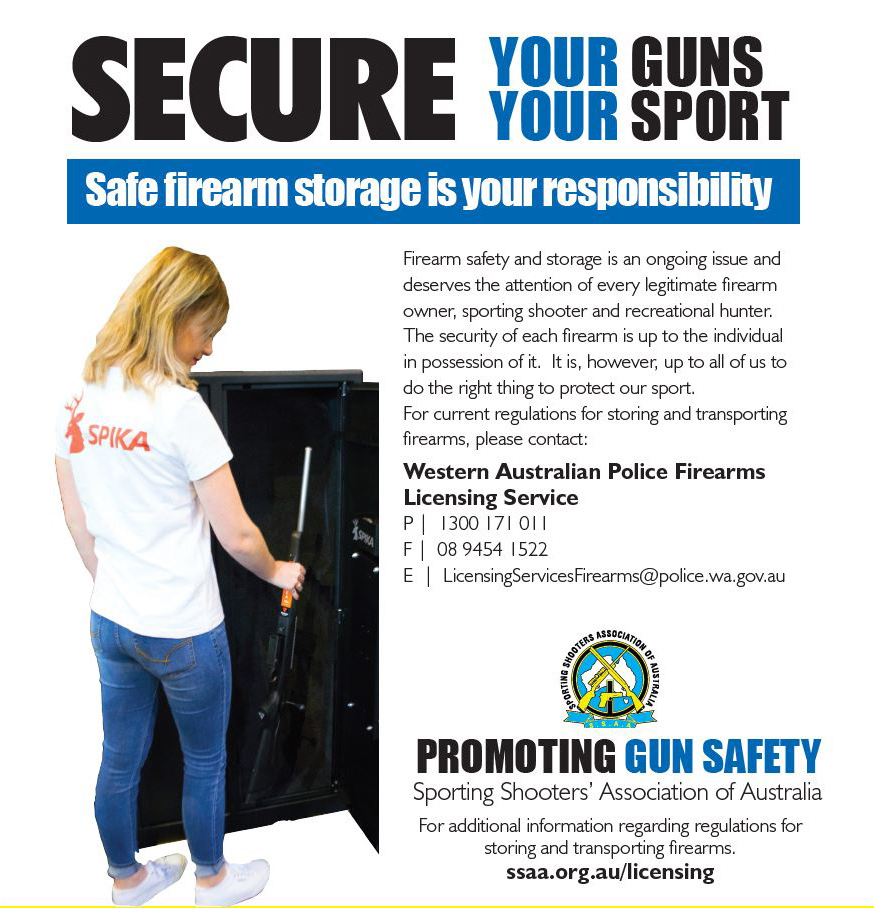 OPERATION BLUESUN
The Western Australia Police (WA Police) Force have instigated Operation Bluesun. This operation is a multi-phased response to remove illicit firearms from the community and promote the safe storage of licensed holders. The rationale for the operation resulted from an intelligence assessment conducted by State Intelligence to provide a broader understanding of firearms theft across the State.
To assist the Working Group in understanding the current representation, I provide the following information;
There are currently 85,000 registered Firearms License Holders across Western Australia, collectively owning 328,000 firearms.Between 01 January 2016 and 30 June 2018, 1317 firearms (0.4% of all firearms licensed in 2018) were stolen. Of the firearms stolen during the above period, 42% of incidents occurred in metropolitan WA, whilst 58% of incidents occurred in regional WA (RWA).Most firearm theft is considered to be opportunistic, however, premises which are suspected or known to contain firearms, such as firearms dealers, may carry a higher risk of being deliberately targeted. Despite the majority of victims securely storing firearms, offenders are still able to access firearms by forcing open gun safes, using keys located onsite or removing gun safes from the premises
The operation commenced on Monday 5th November 2018, to achieve the following objectives;
Educate firearm licensees to ensure safe and secure storage. Elevated response to the investigation of firearms theft. Reduce opportunistic burglaries on rural properties and subsequent firearms theft. Robust focus on recording of intelligence associated with the operation. Improve public confidence by demonstrating that community safety and security is paramount.
Using a number of parameters, State Intelligence have identified a number of FAL Holders considered to be at a high risk of opportunistic firearm theft. Over the next 6 weeks, these FAL holders will be contacted by police and arrangements made to conduct a physical security check and firearms audit.
The intent of the operation is to work in partnership with community, to ensure Western Australia remains safe and secure. Officers are encouraged to use their discretion and will be available to provide advice on security and assist with those who may wish to surrender their firearms.
End