We have just been made aware of this article in the latest WA Police newsletter “From the Line” stating that from next Monday WAPOL will be involved in a ‘national week of action to audit SELECTED FIREARMS LICENCEES with a focus on storage requirements.

As an association representing a lawful and legitimate pastime, we are extremely disappointed to read the implied slur in the article that infers that licensed owners are in some ways linked the lowest end of society or indeed have a bad reputation. It states that Officers will be targeting (and we quote) those with OMCG (Outlaw Motor Cycle Gang) connections, known prolific offenders, those over 70 years of age, anyone with 10 or more firearms and those who have had a burglary within the last 12 months.

This announcement comes less than 9 months after “Operation Bluesun” which was also said to be targeting secure storage of firearms in a similar manner. Of which we received many calls of overzealous behaviour towards those being visited. Further, we received a call this week from a member who we understand is now facing his 6th inspection in this year alone, leaving his neighbors to wonder why the police are continually turning up.

This is another blatant example of how WAPOL appear to view and continue to treat law abiding licensed firearms owners in this state. Legal firearms owners have already ticked all the boxes, had extensive checks and meet their requirements. If someone is a prolific known offender then WAPOL should have done their job in the first place and not issued a firearms license or have cancelled it already. Implying Licensed firearms owners have links to Outlaw Gangs is a disgrace and has reinforced how this Police force and Govt view us. WA Firearms owners also pay the highest fee’s in Australia for the privilege of this treatment.

This article further shows a disgraceful attitude and harassment towards our older generation, you have to wonder if car licenses for those over 70 will be next on the agenda. The recent WA Audit of Firearms letter fiasco was addressed by the Police Minister who recognized that the tone of the letters was out of order and committed to a change of approach???

The Police Minister has continually refused to acknowledge or endorse our recommendations for harsher penalties for those who target and steal firearms particularly in country areas and continues to disappoint with her apparent endorsement of this continued harassment by WAPOL.

The most recent WA Auditor General’s report has shown yet again the failings of WA Firearms licensing system and processes and it’s time for the minister and parliament to step up for some common sense laws in line with the recommendations of the Firearms Act Review.

ITS TIME …… Cut the Red Tape, Reduce the fees and ultimately free up valuable police resources that are being wasted on the continuing mistreatment of lawful and legitimate firearms licence holders in WA.

We ask that you urgently to write and telephone your Local Member and also to write, email and phone the WA Police Ministers office and express your outrage at these continued attacks. 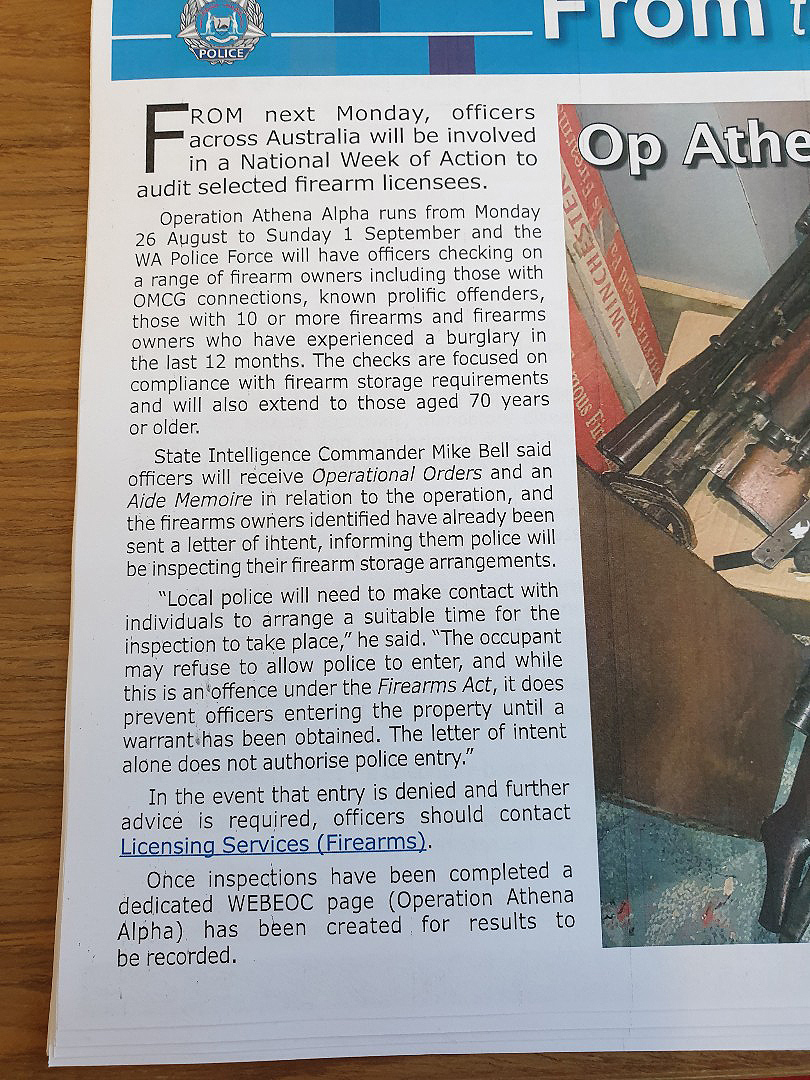