Unfortunately, the weather wasn’t playing nice and shooters were treated to cold and blustery conditions and the SSW to SSE tail winds were challenging at best and no one was safe from the uncontrollable buffeting from the rear.

The State Championship comprised 40 shot matches of each of the five guns. Centrefire and Centrefire Hunter were shot on the Saturday with many being sociable and camping overnight for a good yarn around the fire in the club house. Air Rifle, Small bore and Small bore Hunter were shot on the Sunday with some feeling the effects of a bit too much socialising the night before.

The Club was undergoing significant refurbishment of the roofing and resurfacing of the Rimfire range and works had only partially been completed but shooters and the match director made do with what they had. Well done to the Club and It will look great when it’s done.

Results as posted and congratulation to all those that took out their respective grades in each of the matches. The Top 3 based on (5 – Gun Aggregate) are below:

An honourable mention goes to Ash C for recently graduating out of the Junior ranks and giving the old wood some worries and only narrowly missing out on third spot in a shoot off with Charles.

It was also great to see some new Junior shooters Bianca and Jack participate in their first State Championship and well done to both shooters.

Thanks to the Event Sponsor the Hunters Den for providing the prize pool, SSAA WA for the door prizes and perpetual trophies and to Lightforce who provided a chance to win a set of Lightforce Driving lights for each bank of 5 targets shot in a row (well done Charles). 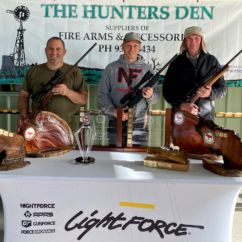 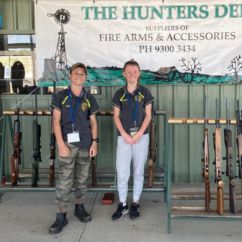